Paul Wright in the Pique News

In the Pique News Magazine

Author of the article: Alyssa Noel
Publishing date: May 23, 2019
Photo by: Paul Wright

IT MIGHT BE HARD to imagine what an orthopedic surgeon and a photographer have in common.

But according to Whistler’s Paul Wright, who has had successful careers in both fields, it’s more than you think.

“It’s knowing the equipment really well, knowing what your outcome will be. It’s being realistic. It was a natural transition for what I trained for,” Wright says.

To back up a little bit: Wright had a long and successful career as an orthopedic surgeon working in Burnaby when, at 57, serious sleep apnea forced him to retire.

“I went back to Langara right away,” he says. “I never had that ‘what am I going to do’ stage in life of retirement.”

To that end, it didn’t take long for Wright to launch into his new career. With a partner, he ran a photography business, primarily shooting corporate events and high-end family shoots.

His eye for photography didn’t come out of nowhere though. “When I was 19 … I couldn’t decide whether to be a wildlife photographer or go into medicine,” he says. “In those days, you didn’t care about dollars. It was what was going to be most challenging.”

While he chose medicine, he also took photos throughout that career—just not as much as he’d like. “I had this pent-up creative side that had been squashed and supressed all these years. I could go and be a little risky because others had to be successful—they had to feed their kids,” he says.

In recent years, Wright has combined his outdoor pursuits and travel with photography—sometimes submitting to The Canadian Press archives for publication and other times selling limited edition prints.

He’s captured whales and spirit bears in the Great Bear Rainforest, athletes in motion at the Paralymics, and dancers and actors on stage.

And, earlier this spring, he had five images selected for a national exhibit hosted by the Professional Photographers of Canada. Ranging from backcountry skiing to the “pick-up man” at a rodeo who rescues bowled-over cowboys, they were on display in Montreal earlier this year as part of the National Image Salon.

“Photographers must show extraordinary talent to win an award among such illustrious company,” says Charles van den Ouden, chair of the National Exhibition Committee, in a release about the award. “We were thrilled to see so many inspiring entries in the competition his year. The salon images clearly demonstrate exceptional skill and quality that professionals bring to the medium of photography.”

That honour is in addition to earning a bronze medal in the reportage category at the 2018 World Photographic Cup, as well as the Nations Award, the highest-scored image entered by Team Canada.

“In my lifetime, that’s the most significant thing I’ll ever place in photography,” Wright says, adding, “When I look around at the other photographers in the World Cup, these are rock stars and I’m a wannabe. I call myself a 20-year-old photographer in a senior citizen’s body.”

Wright is profoundly humble about his achievements as a photographer, particularly since moving to Whistler four years ago and being amongst so many “world-class photographers.”

“We had a cabin in Whistler and when I had this sudden retirement, we looked around at where to live,” he says. “The nicest community we found in all of B.C. was Whistler. There’s the carnival front of Whistler, but then there’s a real community. It’s such a nice place to live.”

Now, having just finished chemotherapy treatment for lymphoma, Wright is getting his strength back and preparing for busy and adventure-filled summer ahead—from kayaking to hiking to a cross-Canada trip to help his daughter move back west.

“I have life activities and then I shoot images while I’m undertaking that,” he says. “I sneak around and do little things that interest me. It’s just being out there. If I come back with no photos, I still have as nice a day as if I did.” 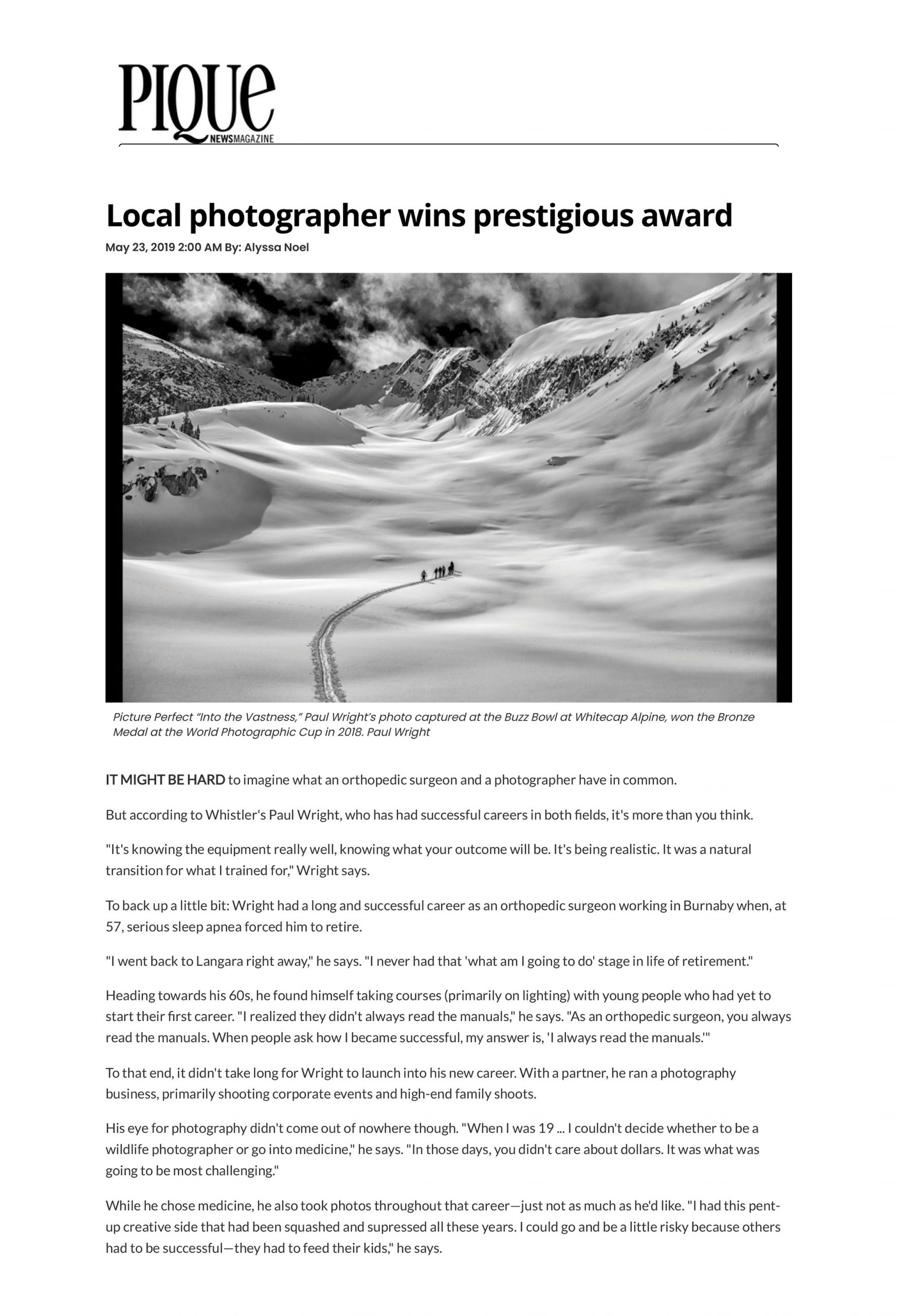 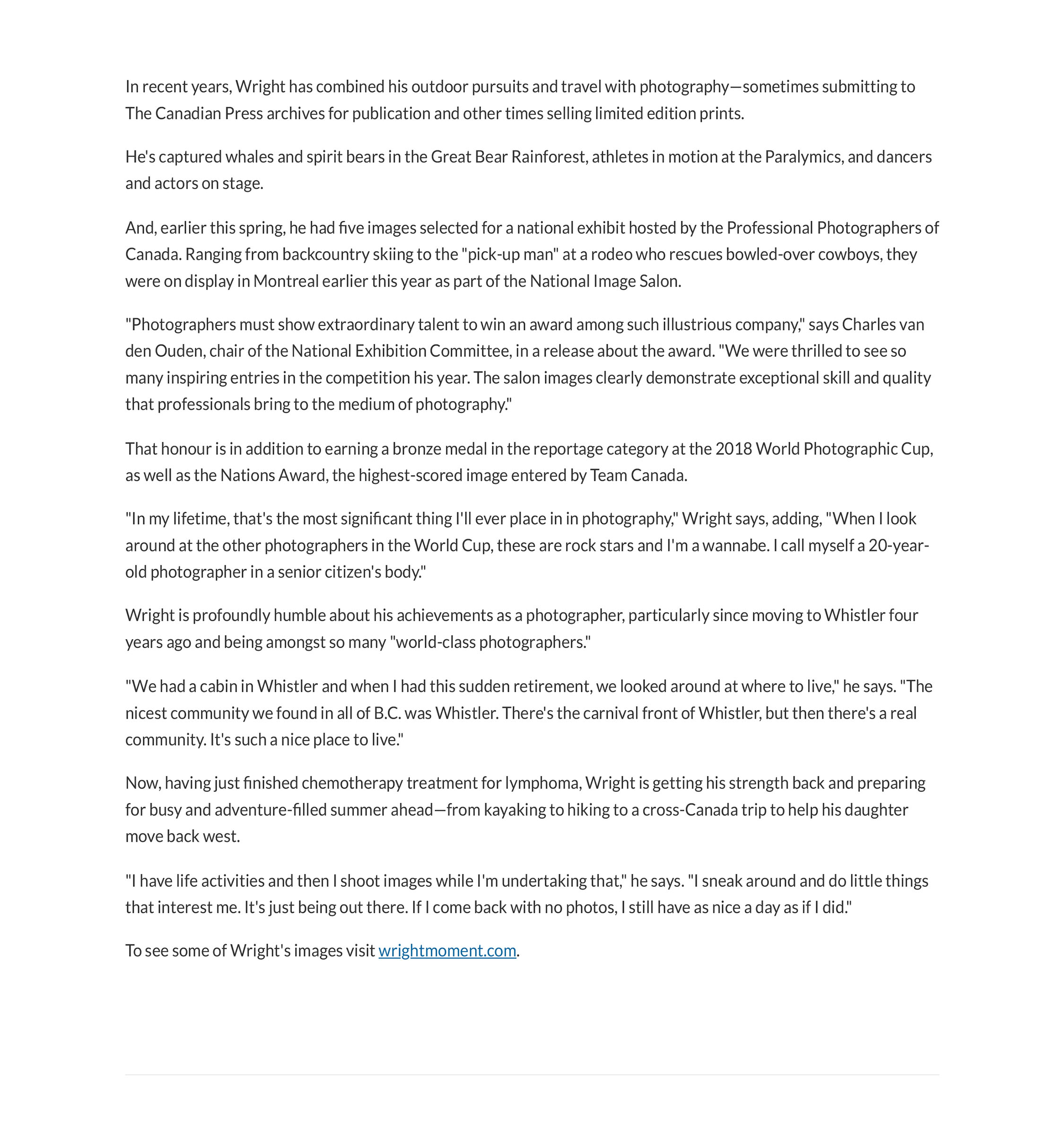 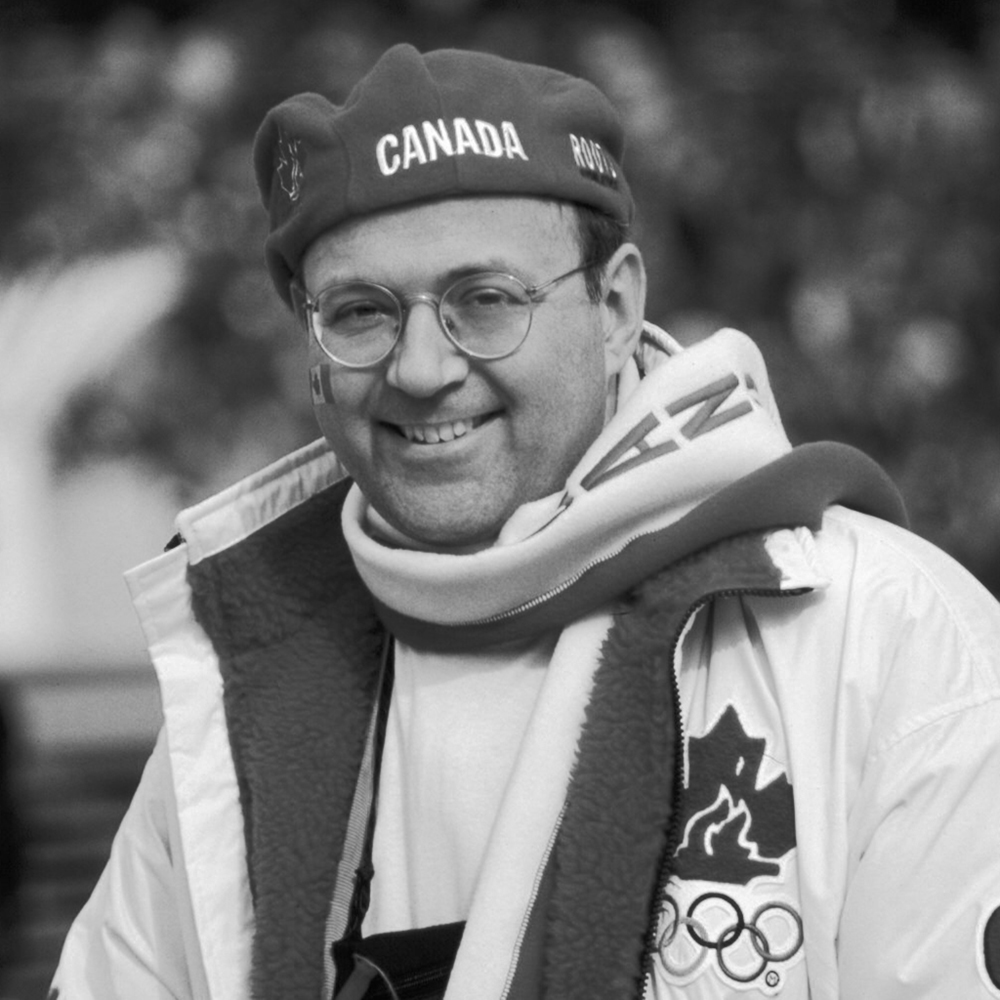 “In my lifetime, that’s the most significant thing I’ll ever place in photography. When I look around at the other photographers in the World Cup, these are rock stars and I’m a wannabe. I call myself a 20-year-old photographer in a senior citizen’s body.”

“Into the Vastness” celebrates the tiny imprint that humans can fleetingly place on our spectacular Canadian Wilderness. A fresh cycle of snow will remove all traces of this privileged tour into untracked snow and mountain scapes. 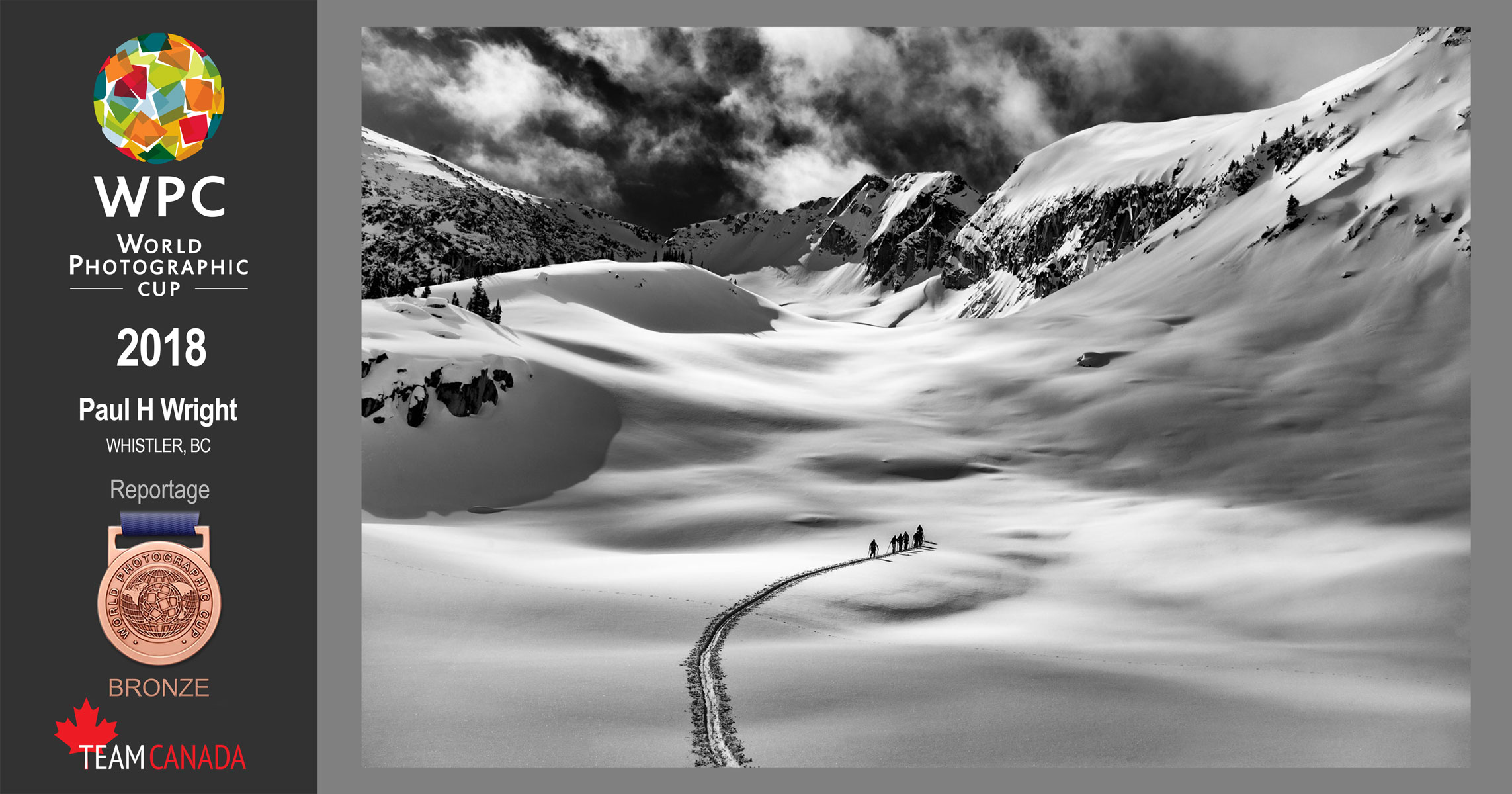